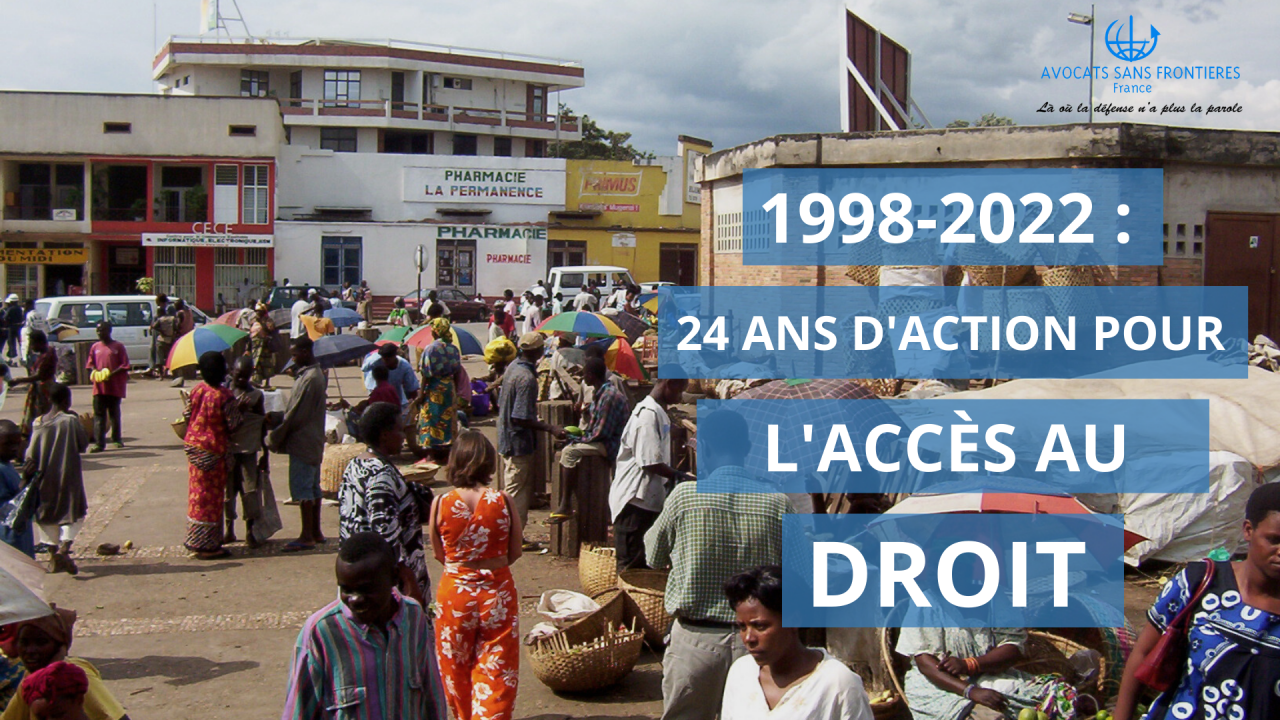 Creation of ASF France by François Cantier, lawyer. Several lawyers, who became members of ASF France, participated in the founding project of the movement Avocats Sans Frontières: "Justice for all in Rwanda", alongside ASF Belgium, by defending the accused and victims of the Rwandan genocide before the extraordinary courts created to that effect  in that country.

New project for a legal aid system in Kosovo: the aim is to defend persons who are  prosecuted for international crimes such as crimes against humanity or war crimes, and the training of lawyers, judges and prosecutors in the new international legal instruments in force.

ASF France is present in Colombia to deal with cases of lawyers threatened or assassinated because of their professional / (legal?) practice.

Start of the intervention in Nigeria with a project of training and reinforcement of the actors of the penal chain. Starting in 2009, ASF France began the fight for the eradication of torture in places of detention and, since 2011, against the death penalty.

Beginning of access to law projects in Cambodia : installation of lawyers throughout Cambodia (2006-2009 / 2010-2012), training of judicial staff in international legal tools (2005-2012), and action to defend the victims of the Khmer Rouge before the Extraordinary Chambers in the Courts of Cambodia (ECCC) (2008-2013)

In French-speaking Africa, ASF France sets up technical and pedagogical training for lawyers and human rights defenders from 15 different countries.

Beginning of the collaboration with ASF Mali through the implementation of a legal caravan to facilitate access to justice for vulnerable people. From 2013, ASF France and ASF Mali set up a system of access to justice and defence of unjustly detained persons, along with training for actors in the penal chain on international tools for the protection of human rights.

In Laos, ASF France contributes to the training of student lawyers in legal tools for the protection of fundamental rights and in professional practice.

ASF France partners with ASF Cameroon for a project to defend vulnerable people, particularly prisoners, with training for lawyers and judicial staff.

ASF France acts in Tunisia, in the framework of a project to strengthen the institutional capacities of the Institut Supérieur de la Profession d'Avocat (ISPA).

Project to fight homophobia in Cameroon, allowing both to raise awareness and to train the media, religious authorities, actors of the penal chain and civil society organisations, to protect the rights of LGBTI people, while ensuring their defence before national courts.

ASF France returns to Cambodia in the province of Battambang to promote access to law and justice, particularly for the poorest.

Defending the rights of migrants in Calais

ASF France intervenes in Côte d'Ivoire to strengthen the capacities and protection of human rights NGOs, and in particular of human rights defenders harassed or threatened because of their engagement.

A new project is implemented in Chad, for the defence of women and minors incarcerated and abused.

ASF France sets up the Samos Legal Center on the island of Samos, Greece, to ensure the basic rights of asylum seekers.

In 2020, ASF France expands its work in Nigeria to address the issues of extrajudicial killings and arbitrary detention.

ASF France has  initiated three projects specifically dedicated to the rights of persons deprived of their liberty, in Mali, Cameroon and Haiti.

ASF France intervenes  for the first time in Guinea to support CSOs in the consolidation of the rule of law and to monitor human rights violations in the context of the Covid-19 pandemic.

Three missions are conducted in Iraqi Kurdistan and Rojava (Syrian Kurdistan) where nearly 200 French children and 80 French women are still being held.

ASF France is starting a media capacity building project in Guinea and Ivory Coast, including the training of journalists, the creation of a collaborative platform dedicated to conflict prevention, and the training of media on how to fight misleading information.


In parallel to these projects, ASF France has intervened in specific cases,taking action for defendants or victims:

2002 - ASF France participated in the defence of Amina Lawal, a young Nigerian woman sentenced to death by stoning for adultery; she was acquitted in September 2003.

2005-2007 - Defense of Bulgarian nurses and a Palestinian doctor in Libya.

2010 - Participation in the trial of the murderers of Floribert Chebeya, human rights defender in the Democratic Republic of Congo.

2012 - ASF France supports and works with the Pakistani lawyers of Asia Bibi, a young woman sentenced to death for blasphemy. At the end of 2018, following the release of Asia Bibi, ASF France mobilized to come to the aid of her lawyer who had to flee the country because of death threats.

2018 - ASF France participates in the observation mission of the so-called "Moria 35" trial; 35 exiles arbitrarily arrested in 2017 in the Moria camp in Greece.


Several statutes recognize the importance of our action: consultative statute with the UN Economic and Social Council (2004), with the African Union (2012), and with the International Organization of the Francophonie (2005). In 2018, ASF France was elected to the Presidency of the Thematic Commission on Peace, Democracy and Human Rights and to the Vice-Presidency of the Conference of INGOs.